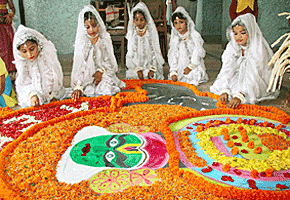 Today is Onam, the most important day in the Keralite’s calendar. Bloated newspapers heralded the arrival of festive season days in advance with two-in-one editions. Television channels whipped up interest with announcements of celebrity chats and other special programmes.

The two-in-one newspaper idea was conceived by Malayala Manorama, which is the most widely circulated Malayalam daily and pulls in the most advertisements, a decade ago. Mathrubhumi followed suit.

The day’s edition has to be printed in two sections because of the limited capacity of the press. The masthead appears in the same size in both the sections, making it difficult to decide which one is the main section.

The front pages of both sections of Manorama carry a note saying: “Two Manoramas today.” Mathrubhumi plays no such trick. It simply says, “In two sections today.”

Traditionally the newspapers also bring out special Onam editions in magazine format with literary content. Since the special edition attracts lots advertisements, the two large newspapers have been bringing it out in two volumes for some years. This year Manorama had to go in for three volumes.

According to market watchers, 50 to 60 per cent of all consumer durables sales in Kerala take place during this season. Sales of expensive items like jewellery and automobiles also go up at this time. This year the makers of a well-known brand announced prizes worth more than Rs9.3 million in a bid to boost sales of their mobile handsets.

Manufacturers of consumer goods, automobiles and mobile handsets and jewellers resort to heavy advertising at this time. Although television probably has more clout than newspapers, the print media still gets the biggest share of the advertising pie.

A website devoted to media matters quoted spokesmen of Malayala Manorama and the Communist Party of India-Marxist daily Deshabhimani as saying they earn one-fifth of their annual advertisement revenue during the Onam season.

Manorama has been working hard for years to boost Onam advertisements. It began Onam brand building a decade ago. The success registered in the early years encouraged it to plan new activities to impress advertisers and advertising agencies.

This year, beginning July, in an innovative campaign, it staged Pulikali, the tiger dance which is associated with Onam celebrations, at the offices of big and small advertising agencies in Mumbai, Delhi, Bengaluru and Chennai. As the dancer performed to the accompaniment of drums, the newspaper’s marketing staff handed out to media planners pamphlets which said “The best way to reach Malayalees is through Manorama.”

The two Manoramas the subscribers received each day for a fortnight for the usual price and the three volumes of the special they got for Rs50 testify to the success of the paper’s efforts.

The media website’s reporter who spoke to marketing officials of Mathrubhumi and Deshabhimani said both were hoping to haul in twice as much as they did last year.

However, not many consumers of the media — newspaper readers and television viewers — can share their same sense of exhilaration. For, the Onam fare which has come in heavy packages is rather light.

The newspaper can accommodate more advertisements by increasing the number of pages. But it cannot find enough new poets and writers to produce additional reading material to fill the extra pages.

Many editors fill the extra pages with material that can be generated with comparative ease like celebrity interviews and discussions. The superstars hogged much of the space in one Onam special. Another devoted 55 pages (inclusive of advertisements, of course) to a minor actor-politician and 23 more to a comedian.
Cartoonist EP Bunny, who lives outside the state, provided a rare insight into the local scene in an interview published by Madhyamam in its Onam special. “Although power has been decentarlised to the panchayat level, in daily life the Keralite has to go through a more hierarchical setup than before,” he said. “The people maintain their dignity playing snake and ladder everyday.”
Posted by BHASKAR at 9:37 AM