M.Sulfath, social activist and teacher of Government Higher Secondary School, Cheruthazham, Kunnumbram, Kannur District, has written to Leader of the Opposition V.S. Achuthanandan drawing attention to the campaign against her by some persons belonging to the CPI-M and seeking an end to harassment. 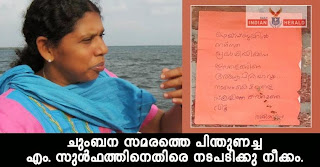 Although party men are using her support to the Kiss of Love campaign as the pretext for the campaign against her, the real reason is the support she gave to the family of a Dalit student who was allegedly the victim of sexual harassment by a teacher.

The following is the text of her letter:

I have been a teacher for the past 27 years. Presently I am working in the GHSS, Cheruthazham,
Kannur. l have been involved in struggles for women's rights and against sexual assaults on women for the past three decades. I work in association with Anweshi,, Kozhikode, and the
women's magazine 'Sanghatitha’, edited by the famous Malayalam writer Sara Joseph.

I am writlng this letter to bring to your notice, the organised attempts by some people including local CPM leaders to malign me and spread scandals against me in the school and outside, in connection with a sexual assault case that occurred in the school recently. A dalit girl studying in 9th standard was asked into the staff room under the pretext of giving a notebook after the school hours and was sexually abused by Mr. A.Anilkumar, a teacher according to a written complaint submitted to the school on 17 09.2014 by the girl's guardians; but what followed from the part of
the School authorities was an attempt to slight the complaint and to save the offending teacher somehow. After the girl's relatives came to the school with their complaint, the president of the school's Parent-Teacher Association, who is also the secretary of CPI-M Cheruthazham East local committee, came to the school. The school authorities took the decision that it was enough to transfer the concerned teacher from that school and that no other action was necessary against him. I had requested the Headmaster to view the sexual abuse by Mr. A  Anilkumar, the teacher seriously, especially as there had been a precedent of the very same person having shown sexual misconduct against a female colleague in the same school earlier, as was reported in a staff council meeting. I also requested him to contact and seek advice from Child Welfare Committee or Childline, and to initiate legal proceedings against the offender.

Instead of following the required legal procedure, what the Headmaster and a few of the staff members did was to convene a staff meeting on the afternoon of 17.09.2014, allowing even the alleged offender to participate in that meeting. When I expressed my dissent and emphasised the need to support the victim, the meeting chose to accuse me of trying to break the unity among the staff and to disrupt the collective decision taken by the teachers. As it was clear that the school authorities did not inform the police of the complaint submitted by the girl's relatives, I had helped the guardians of the girl to contact Child Welfare Committee. The Childline enquiry team came to the girl's house and then to the school on 18.9.2O14. They reported the matter to the police by noon .The police registered a case on the same day.

However, the accused teacher influenced the DDE (District Director of Education), Kannur, and managed to get a transfer on the same day, that is 18.9.2014. The DDE allowed his request for transfer before taking up any enquiry into the issue. He came to the GHSS, Cheruthazham, obtained his relieving order, and joined in GHSS Vayakkara on the same day, and immediately proceeded on leave and absconded.
I had informed Smt. P K Sreemathy teacher, honourable MP, of the incidents at the school on the night of 17 9 2014 itself. However, neither the party nor its mass organisations took any initiative for a proper response or protest. The Cheruthazham panchayat president Com. C M Venugopal visited the girl's house and promised support. There was no other move by the party against the culprits.

In the PTA executive committee and general body meetings, instead of pursuing the course of justice for the girl victim, the headmaster and a section of the teachers tried to raise allegations against me that I was spoiling the reputation of the school and spreading disgraceful news in the media. In the PTA executive committee meeting, consisting of many local leaders of the CPI-M also, one of the leaders even threw up a challenge against me: Do you dare to get the teacher arrested? 1n the PTA general body meeting convened later, the HM, senior Assistant and other leading members made the evil move to pass a resolution authorising action against me. It was defeated only because of the support of a section of mothers who knew the truth of the matter.
The HM was so revengeful that I was denied casual leave, when I applied for it as my stomach was upset.

Mentally oppressed and ostracised by many of my colleagues there, I have entered on leave.
Another teacher has been appointed in my place to avoid hardship to students. The school staff, consisting of a majority of members belonging to KSTA, an organisation affiliated to the left, and a section of the parent community are spreading wild rumours against me now. As the move against me was defeated in the PTA meeting the Development Council has convened another meeting of so-called "local people” and taken a decision that I would not be allowed even to enter the school. Though I am on leave, when I reached the school on 6.11.2014 to receive my salary, they used a section of the students to conduct a demonstration against me, to shower abuses against me and to detain me at the school gate. I was told that a few teachers including leaders of KSTA also held a similar demonstration earlier. One of the allegations was that I was responsible for dragging the HM also into the legal proceedings The Protection of Children from Sexual Offences Act 2012 says the HM is responsible for communicating the offence to the police. It is actually as per this provision that the HM was implicated for his failure to do his duty. I am absolutely innocent about the matter.

What is quite surprising is the fact that in this case at Cheruthazham, the CPI-M and its mass
organisations which used to support the victims of sexual abuse are spreading rumours against the offended child and her mother just because I happened to help this unfortunate victim of sexual assault in getting legal assistance, I am now being singled out and persecuted through rumours and obscene posters in the school and its premises by anonymous entities and so I humbly request you to help the girl who is the victim of sexual assault and to support me for having assisted her in seeking remedy. I would also request you to take severe action against those who are spreading malicious propaganda against me and trying to prevent my access to my school.
Once again I request you to intervene in order to create an atmosphere that will enable me to continue in the same school without further harassment.
Yours truly,
M.Sulfath
Cheruthazham
9.11.2014
Posted by BHASKAR at 9:22 AM