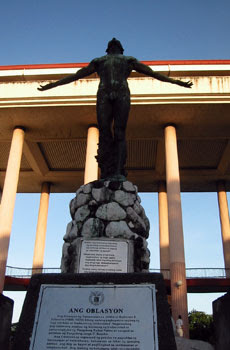 The picture above is of a bronze statue that stands in front of the administrative building of the century-old, state-owned University of the Philippines at Diliman, Quezon City. It is named Oblation, which means offering. It depicts a nude male, standing with outstretched hands, as if to say "I have nothing to hide".

This nude figure has greeted students, faculty members and visitors at the entrance of the campus for more than 60 years. No one, male or female, has so far complained that it turns them on. Or that it arouses obscene thoughts in them. Even the conservative Catholic Church, which commands the loyalty of the bulk of the population of the Philippines, has not seen obscenity in it.

What prompts me to post the picture and write about it is the controversy in Kerala over the obscenity which some people have seen in the plant sculpture Sagara Kanya (Mermaid) in the Cochin University of Science and Technology (Cusat) campus at Kochi, the cutting off of its breasts by the fast breeding tribe of self-appointed moral police and the reported finding of the pro-vice chancellor, Godfrey Louis, that Sagar Kanya is not an artistic work suited for an educational institution.

Apparently the last word on the subject has not been said yet. The university syndicate has reportedly set up a three-member committee to conduct a further enquiry.

Sagar Kanya was created by a gardener, Varghese, of Elamkunnapuzha, who, inspired by Kanayi Kunhiraman’s sculpture at Thiruvananthapuram, made out a female figure by growing and cropping plants. With the university gardeners tending it with care, it stood there for two decades without provoking any obscene thoughts in the students who passed through the portals of the institution during that period. Then, somehow, it started disturbing some employees and they complained to the registrar, N. Chandramohanakumar. 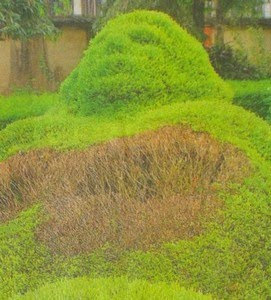 Cusat Express, a campus blog, quoted the registrar as saying "I received two complaints objecting to the nude figure of the mermaid at the Cusat garden. The complaints were forwarded by Women's Welfare Association of the Cusat and some Cusat employees."

According to Cusat Express, Chandramohanakumar said he was against disfigurement of the work of art, “but as an administrator I was forced to act on it.” He claimed there was a Supreme Court order which discouraged educational institutions exhibiting such paintings and art works.

Kanayi Kunhiraman recalled that some people had tried to assault him when he did his famous sculpture Yakshi at the Malampuzha dam site and said such people appeared to be still around. “Education at a campus that does not inculcate appreciation of art is purposeless,” he added.

Jose Joseph, New Delhi-based animator, painter and cartoonist, expressed his feelings in a cartoon published in his blog. It is reproduced below. 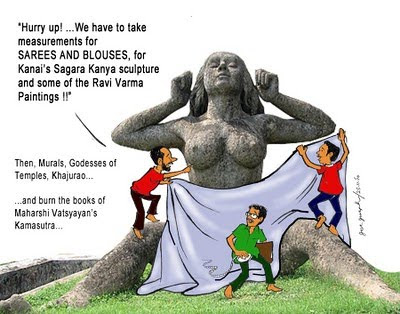 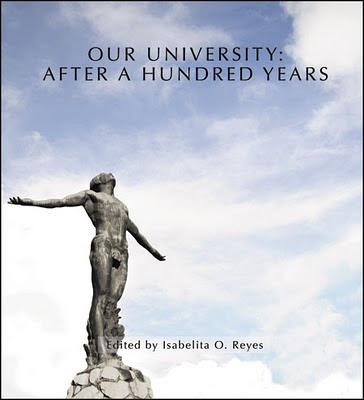 When the University of the Philippines celebrated its centenary in 2008, it had a distinguished woman, Dr Emerlinda R. Román, as its president. Another woman, Isabelita O. Ryes, was the editor of the centennial souvenir. And on the cover of the souvenir was a picture of Oblation.

Incidentally, as in Kerala, girl students outnumber boys in most departments in almost all universities of the Philippines.

Those who find the Cusat Sagar Kanya objectionable must be made to realize that the obscenity they see lies not in the clipped plants but in their own minds. Psychiatrists may be able to help there.
Posted by BHASKAR at 11:00 PM 4 comments: