The communal genii whose support the Congress invoked to oust Kerala's first Communist government more than 50 years ago are still around and turning the state's politics viral.

Across the fractured polity there is animated discussion on how the decision of the Indian Union Muslim League, the second largest constituent of the Congress-led United Democratic Front, to press its year-old demand for an additional ministerial berth will affect the communal balance.

The third largest UDF constituent, the Kerala Congress (Mani), a camouflaged Christian formation with a Nair sprinkle, supports the League demand. However, several prominent Congressmen as well as leaders of the Communist Party of India-Marxist, the Bharatiya Janata Party, the Nair Service Society of the forward Nair community and Sree Narayana Dharma Paripalana Yogam of the backward Ezhava community have said raising League representation in the government will upset the communal balance.

While forming the government after the UDF scraped through with a 72-68 majority in the 140-member assembly in last year's elections, Chief Minister Oommen Chandy offered the League four ministerial berths, as in his previous government. However, League president Hyderali Shihab Thangal named Manjalamkuzhi Ali as the party's fifth minister. Last week he demanded that Ali must be sworn in along with Anoop Jacob of the Kerala Congress (Jacob), who won the Piravam by-election and is waiting to take his late father's place in the council of ministers.

Unable to resist the League's pressure, the chief minister has tossed the problem into the high command's lap. He has also reportedly proposed that the League be offered assembly speakership, now held by a Congressman, in lieu of fifth ministership.

The League's stubbornness and the Kerala Congress's support to it are manifestations of growing communal assertiveness, origins of which can be traced to the 'liberation struggle' of 1959 which gave the Centre the pretext to dismiss the Communist ministry.

The prime movers behind the agitation were the Church, which was infuriated by the government's attempt to curb exploitation of teachers by private managements, a majority of which are under different Christian denominations, and the NSS, which resented dismantling of the feudal system of land ownership dominated by Hindu forward castes.

The Praja Socialist Party and the Indian Union Muslim League, which had influence among Muslims of the Malabar region, made common cause with the Congress. In the elections that followed the government's ouster the three parties together worsted the Communists. Averse to accommodating the successor of the pre-Partition Muslim League in the Cabinet, the Congress placated it with the Speakership.

After the Congress ended its ties with the League, the CPI-M stepped in. As its ally, the League got two Cabinet berths. That helped it earn political respectability. Playing his cards well in the days of political uncertainty, C.H. Mohammed Koya, leader of the 13-member League legislature party, became chief minister in 1979. However, the government lasted only 50 days.

The Kerala Congress was formed by a group of Christian and Nair legislators who revolted against backward class chief minister R. Sankar and walked out of the Congress in 1964. It has undergone many splits and mergers, but its caste/religious composition remains unchanged.

The League is now a part of the state's political establishment. For the past several decades it has been with the Congress. Since 2009 it is also represented in the Congress-led government at the Centre.

The cry of communal imbalance is a response to the perceived over-representation of the minority communities in the present government. Of the 21 ministers sworn in last year, six, including the chief minister, were Christians and five Muslims. That made the minorities, which together account for 44 per cent of the population, a majority in the government. A fifth League minister will distort the picture further.

However, this is not the first skewed government in the state's history. In the last Left Democratic Front government the minorities were heavily under-represented. Of the 21 ministers, only two were Muslims, although the community accounts for nearly a quarter of the population. Christians who constitute 19 per cent were better off with four ministers.

Gross imbalance between the forward and backward castes has also been a feature of successive governments. In the present Cabinet there are only two ministers from the backward Ezhava community, which is said to account for 22 per cent of the population. In the last LDF government, it had six members, including the chief minister. All four ministers of the CPI were from that community.

The cause of the persistent communal imbalance is the narrow social base of the political parties. While Hindus constitute only 56 percent of the population they form 80 percent of the CPI-M membership. The caste/religious breakup of Congress membership is not known, but its leadership is widely perceived as a combine of Savarna elements of the Christian and Hindu religions. The formula the state leadership has placed before the Congress high command reinforces this perception. It envisages increased Cabinet representation to the Hindu forward caste to contain fallout resulting from gift of Speakership to the Muslim League.

The narrow religious base of the League and the Kerala Congress is just one of the problems. Their geographical base and gender base too are narrow. More representation for them in the Cabinet means more men from the same religions and same regions.

This commerntary was distributed by IANS on April 11, 2012
Posted by BHASKAR at 10:54 PM No comments: 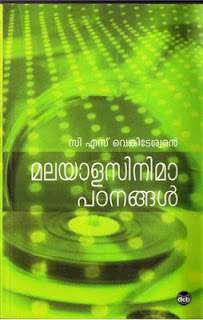 B. R. P. BHASKAR
Malayalam cinema, which scaled heights of glory ahead of its South Indian cousins, has been down in the dumps for some time, leading to animated discussions on ways to overcome the crisis that has gripped it. Against this background, the appearance of C.S. Venkiteswaran's writings, which appeared in various periodicals in the recent past, in book form, is timely.

Malayalam films made an early impact with realistic handling of social issues and popular resistance. Venkiteswaran, a perspective observer and critic, attributes the change in the character of cinema, which began in the 1970s, to factors such as breakup of the joint family and introduction of land reforms. The problems of the individual, especially conflicts within, now came to the fore. Commercial aspects of the cinema also gained prominence at this stage.

Later television arrived and cinema retreated to sex and comedy. Now, he says, instead of facing the challenge squarely and moving to a new phase, it is seeking shelter behind fading stars and trotting out excuses like lack of good scripts.
He warns the industry that if it does not address the problem of lack of professionalism, it will be relegated to a ghetto in this age of globalisation.

The book is profusely illustrated but the pictures are poorly reproduced.

Year 2012 marks the centenary of the abolition of Marumakkathayam (matrilinear system) which prevailed in Kerala for centuries.

The event appears to have escaped the attention of the media and other institutions which celebrate with gusto the 90th and 100th birthdays of the successors of feudal rulers and take solemn note of the anniversaries of boat tragedies and tsunamis.