A Dalit poet writing in English, based in Kerala 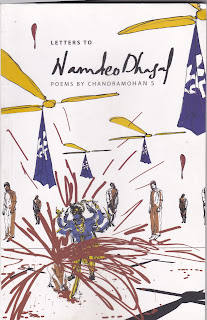 Until I saw Letters to Namdeo Dhasal, poems by Chandramohan S, recently I did not know we had amidst us in Kerala a Dalit poet writing in English.

Chandramohan, who appears to be a worthy successor to Kamala Das, the first Keralite to win recognition as a poet in English, lives in Thruvananthapuram.

Letters to Namdeo Dhasal is Chandramohan’s second book of poems. The first, Warscape Verses, was published in 2014.

Chandramohan’s world view is breath-taking. Shambuka, Nangeli, Marie Magdalena, Jim Crow, Dow Jones and Fredreich Engels are all in it.

Keki N. Daruwala, the renowned poet, writes in The Hindu:

Dalit poetry, based on 2,000 years of experiencing atrocities from caste Hindus, needs to be handled respectfully. Letters to Namdeo Dhasal by Chandramohan S. has just landed on my table. An easy way out with critiquing Dalit poetry is to say it is political, quote some lines, and pass on. There is more to Chandramohan. For a Dalit poet to write in English is itself a political act. But he keeps referring to ‘vernacular rivers’. He is fighting (and deriding) caste and elitism at the same time. Not only that, he stands up for the immigrant and the third world. At our malls, ‘A green eyed petrodollar/ Engulfs the third world like a tsunami.’

In a poem ‘Occupied Language’, after talking of abandoned adjectives and ‘vowels lynched and hung upside down’ (like tortured prisoners?) he talks of colonial symbols on a map and ‘refugees fleeing through edited check points/ to seek asylum in an alien tongue.’ The poem ends with the immigrant into the elite language (English, let’s face it) ‘abbreviating his surname’ and then ‘stripping bare the sterile meat of/ An evacuated language.’ I have chosen not to quote the more telling attacks on caste.

A poem on Murugan who hanged himself in Hyderabad (and how the BJP cried itself hoarse , saying he was not a Dalit) ends with the lines, ‘We become him/ Conform or perish.’ We get defiance: ‘This poem refuses to undergo painful procedures/ Like the long intrusive questionnaire … before it is granted a visa.’ (‘The Muse in the Market Place’.)

He will not be regimented by those who wear nationalism on their sleeves. He has a strong ‘Beef Poem’. In ‘Love in the Time of CCTV’, he says, ‘You are under surveillance when chalk scrapes/ On the blackboard,/ when you walk in straight lines, march in tune/ To the drumbeats of uniformed discipline/ While lip synching to the national anthem.’

I have been unable to mention some beautiful poems like ‘Portrait of the Woman as Young Woman’. Meena Kandasamy is mentioned in the Introduction. I, for one, have been following her prose and poetry closely with respect.

Its a wonderful post and very helpful, thanks for all this information. You are including better information regarding this topic in an effective way.Thank you so much